The sun gradually descends, meeting the calm surface of An Duong Lake. 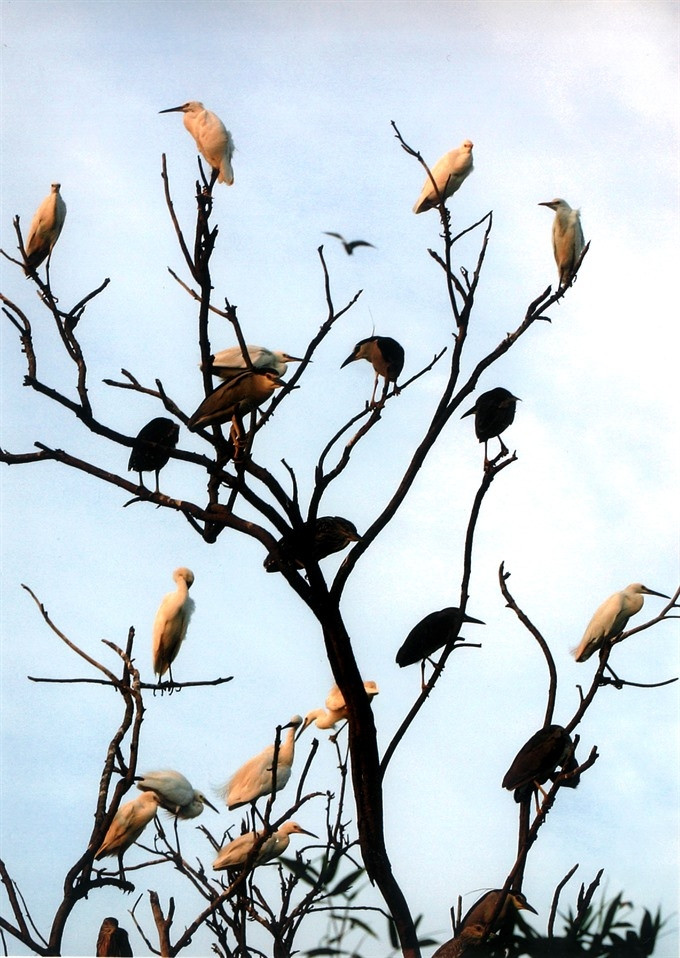 Popular place: Birds flock here most between the 10th and 3rd lunar month while most lay eggs between the 2nd and 8th lunar month. VNS Photo Truong Vi
Birdsong echoes around the shore, while storks perch on the two islands nestled in the middle of the water.

A cool wind blows across the waves.

The boat moves slowly and quietly on the water so it does not scare the birds. The lower the sun descends, the more birds fly back.

The tourists are captivated with the romantic scene. They take photos with their smartphones and cameras.
Giang has worked for the past ten years at Chi Lang Stork Island Tourism Site in Thanh Mien District, in the northern province of Hai Duong. 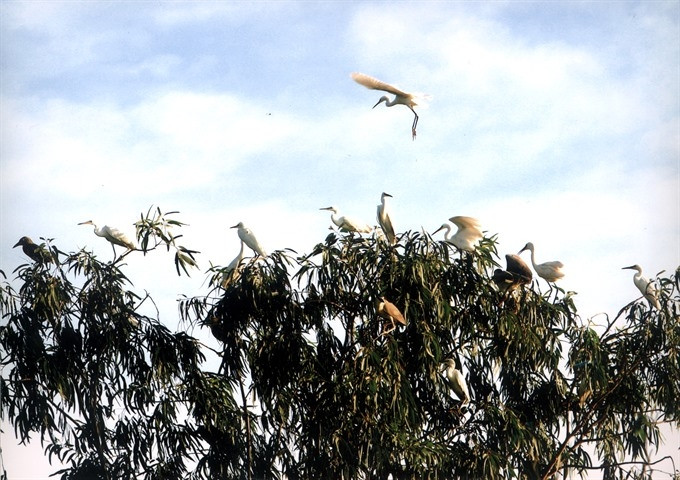 Winging it: Around 16,000 storks and 6,000 birds of other kinds nest in the area. VNS Photo Truong Vi
Living near the lake, Giang has witnessed the daily changes of the site.

“Today is a weekday so not many people flock here,” he told. “I’m busier during weekends and national holidays.”

Giang said this year the number of birds had increased compared to the same period last year.
The site, which actually consists of two lakes – An Duong and Trieu Duong – and covers a total area of 67ha, hosts two islands. The two islands measure over 7,300sq.m. It is home for around 16,000 storks and 6,000 birds of other kinds.

According to scientists, there are some rare, nearly extinct, birds like grey herons, kingfishers, and screech owl. 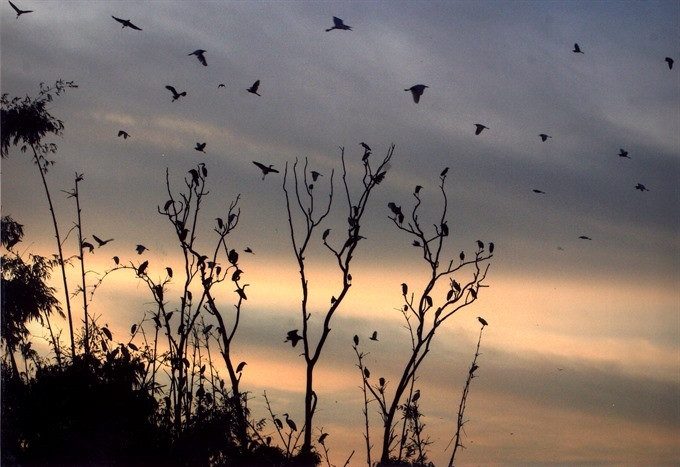 Evening travel: Birds flock home at sunset. VNS Photo Truong Vi
It is believed that many of them have travelled here every year from China, Myanmar, India and Nepal.

The site also hosts various kinds of rare fish.
Scientists have judged the lake a natural reserve with a high level of biodiversity which is almost perfectly preserved in the northern region of the country.
Giang said recently stone dykes surrounding the islands have been built, affecting the birds.

“Normally, the area is quiet and clean, which provides favourable conditions for the birds to nest,” he said.

Giang said he, alongside 13 members of the site’s management board, have acted as guards, taking care of the birds. 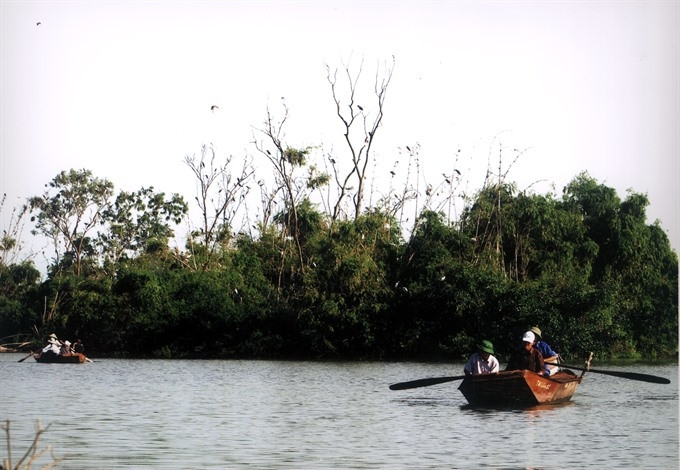 Natural scene: The site, which actually consists of two lakes, An Duong and Trieu Duong, covers a total area of 67 ha and hosts two islands. VNS Photo Truong Vi
“We check the islands every day to see if any bird needs help,” he said. “We treat them whenever they need medical attention.

“Maybe that’s why some of them even remember us as we saved their lives and return here often, if not every day.”
Giang said they plant more bamboos every year to host the increasing number of birds.

Nguyen Dang Dam, a retiree, who contributed to the tourism site since the 1990s, now acts as the deputy director of the site’s managing board.

“It is easier for us to manage the site as people’s knowledge has improved,” he said.

“We have persuaded some households to move out of the islands to offer more secluded places for the birds,” he said. 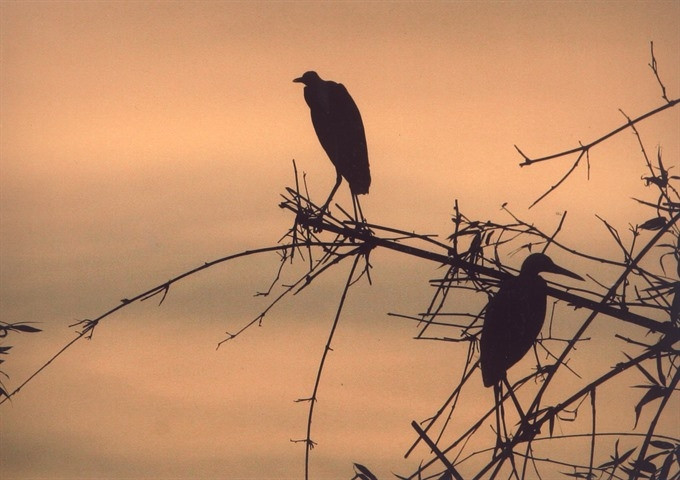 Twilight: Birds perch on branches for the evening. VNS Photo Truong Vi
Locals no longer catch the birds for food.

Long history
The legend of the lake has been passed down many generations. They said in the early 15th century, serious floods damaged a long section of dyke along the Hong (Red) River.

The floods formed a lake at the site with an island in the middle. Trees have grown on the island over time. The lake became an abundant source of fish and shrimp, while stork and other birds have flocked here ever since.

Khong Quoc Toan, deputy chairman of Thanh Mien District’s People’s Committee, said a project to upgrade the site has been implemented with financial support from the Government and the provincial authorities. 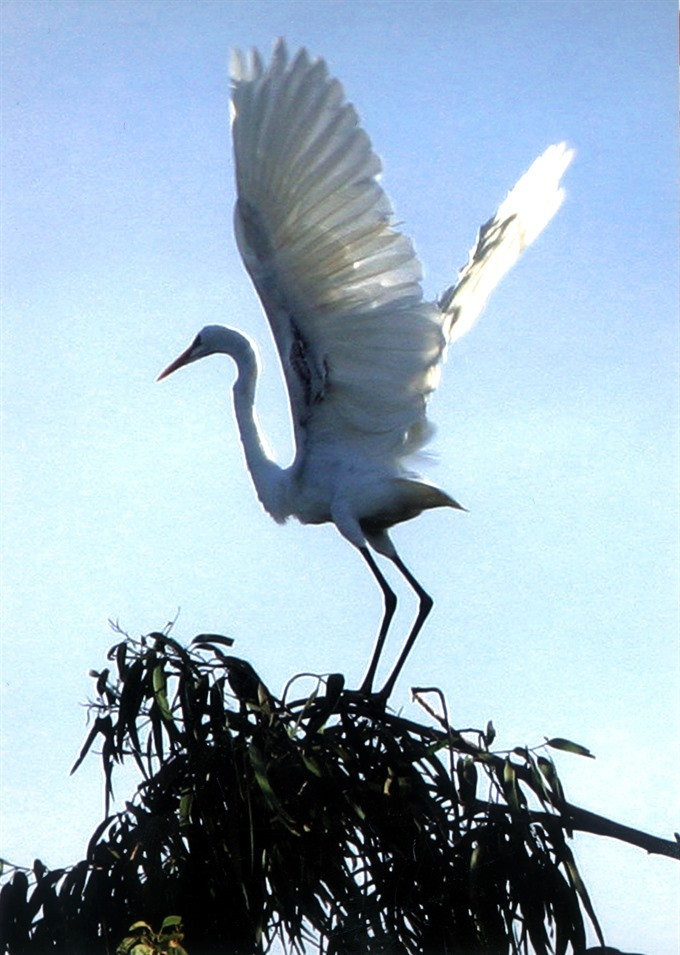 Feather: More and more birds, mostly storks, have been flocking here. VNS Photo Truong Vi
“The site is like lungs for the whole region,” he said. “The National Landscape Relic Site has been an important destination for eco-tours in Hai Dương Province.”

The project has received a fund of VND45 billion (US$1.9 million). The aim is to enlarge the area by more than two hectares, develop another island to lure more birds, and build an area to store live food for the birds.

“The project will be completed early next year, we hope,” he said.

Community project
“The birds are a natural treasure – providing a tranquil and clean environment for them means a better future for our children,” said Le Quang Phuoc, who lives close to the site. 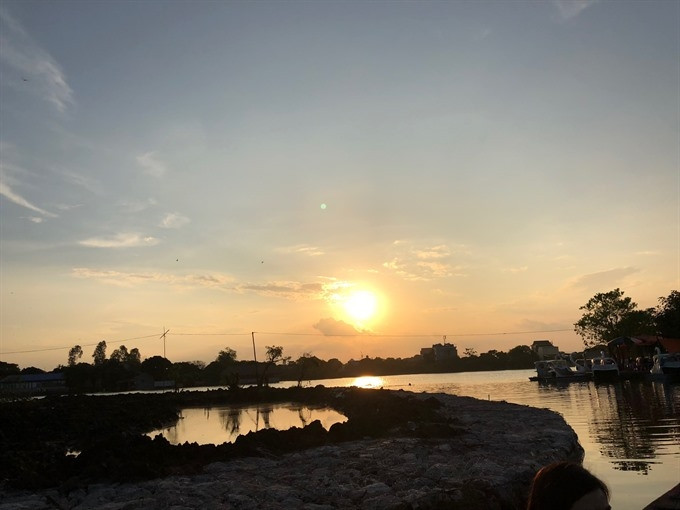 Evening: Sunset at the lake. VNS Photo Le Huong
Phuoc’s family has run a homestay service for the past four years.

“We mostly host foreign tourists from travel agencies in Hà Nội,” he said. “Many groups ride bicycles. They spend one night with us on the way to explore neighbouring villages.”

Phuoc said his house can host up to 20 tourists a night and each month he receives up to 80 guests.

“The income from the homestay service has considerably improved our lives,” he said.

Viola Berman, a tourist from Belgium, appreciated the natural scenery.

“I love birds and nature so I like this place,” she said. “I think it would be even better if there was place for us to camp inside the lake area so that we could live closer to nature rather than staying indoors.” 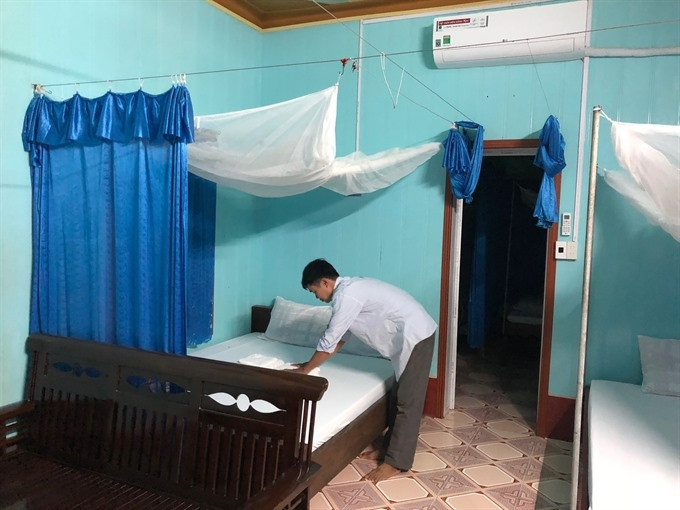 Though 20 households have registered to offer the service, only five families have joined the system.

Nearly ten households have opened guest houses and hotels in the area.

When the project is complete, the tourism site will be able to offer up to 40 rooms for visitors as well.
“Both residents and authorities have supported the project,” said Dam. “It is up to the birds to decide whether to nest here with us longer or not.”
Every year, the site receives about 35,000 visitors.
LE HUONG - HONG VAN (Vietnamnews)