Party General Secretary Nguyen Phu Trong has called for work acceleration to perfect the Party and political systems, socio-economic management, and the fight against corruption and negative behaviors. 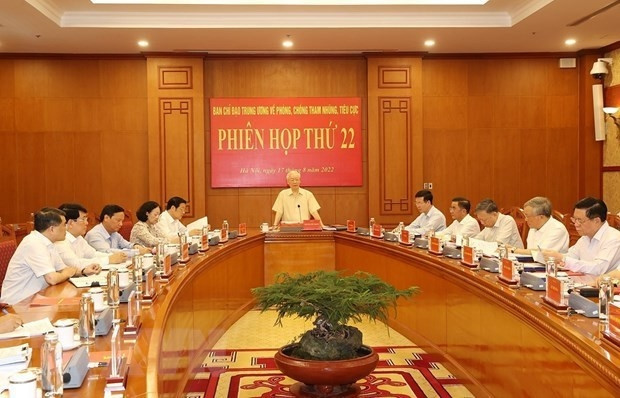 Party General Secretary Nguyen Phu Trong speaks at the meeting. Photo: VNA
Chairing the 22nd meeting of the Central Steering Committee for Corruption and Negative Behavior Prevention and Control in Ha Noi on August 17, Trong also requested the submission of regulations regarding power control to the Politburo for approval towards fighting corruption in inspection, supervision, Party discipline enforcement, audit, investigation, prosecution, trial and enforcement of judgments, law-building, use and management of public finances and assets, and press and media activities.

He also ordered the investigation, prosecution and trial of cases under the watch of the committee, striving to finish investigatigations of 14 cases, prosecuting 20 others, holding first-instance trials for 25 cases and appeal trials for five others later this year.

The leader called for attention to promptly completing thematic inspection on discovery and settlement of complaints, prosecution of corruption, and evaluation of assets.

At the same time, the quality and efficiency of inspections, supervision and audits must be improved, focusing on fields of public concern and prone to negativity.

It is necessary to continue improving the efficiency of awareness campaigns among officials, Party members and people about integrity and anti-corruption; build revolutionary ethical standards of cadres and Party members in the new situation, and further uphold the role of the media in this effort, he said.

In the end, he called for drastic and synchronous changes in combating corruption and negative behaviors from the grassroots level.

In the first half of this year, the committee directed 13 important schemes on anti-corruption. The Party Central Committee, Politburo and Secretariat issued 23 resolutions, directives, conclusions and regulations on Party building and rectification and anti-corruption, especially establishing steering committees on anti-corruption in provinces and centrally-run cities. The National Assembly adopted eight draft laws while the Government issued 59 decrees and decisions. Ministries and departments issued 216 circulars and joint circulars guiding the enforcement of laws on socio-economic management and anti-corruption.

The inspection and auditing sectors suggested reclaiming over 15.41 trillion VND (669 million USD) and 134ha of land, imposing administrative fines on 1,682 collectives and 2,676 individuals. Ministries, agencies and localities transferred 414 suspected criminal cases to investigative agencies in line with the law.
VNA