Nam Sach stands side by side with poor people

Party committees and authorities of Nam Sach district have for years paid attention to caring for and supporting the poor, which is actively responded to by businesses, benefactors, and people from all walks of life. 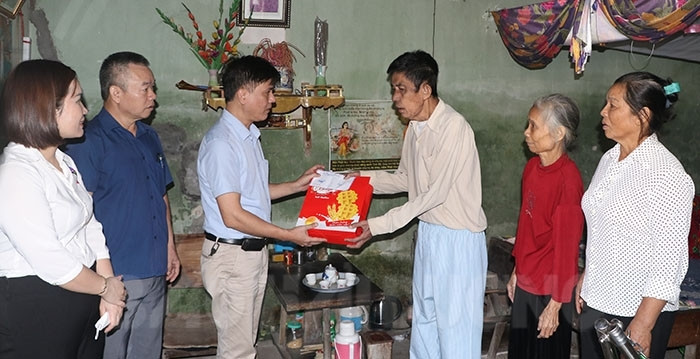 The Fatherland Front Committee of Nam Sach district jointly presents a gift to a poor household in Hop Tien commune
In the past few days, in response to the peak month For the Poor 2022 and the 92nd founding anniversary of the Vietnam Fatherland Front (November 18, 1930 - 2022), the Fatherland Front at all levels and member organizations in the district are focusing on taking care of and helping poor households have more conditions and motivation to escape poverty.

On this occasion, the district authorities have deducted the Fund for the Poor to assist the construction of nine “great unity” houses for poor and disadvantaged households in the locality with 60 million VND/ house, visited and presented gifts to 25 poor households, and encouraged each commune and township to offer at least 10 gifts to poor families.

Do Thi Chuyen in Hoang Duong hamlet, An Lam commune, one of the poor people supported with house construction this time, said: “My family is in difficult circumstances, so my two children and I have had to live in a deteriorated and leaky house for years. I’m very happy to be helped to rebuild it this time. We will have a new cozy house this Lunar New Year.”

There are 73 poor and near-poor households in Nam Sach township. In response to the peak month For the Poor 2022, the township authorities have received and distributed more than a ton of rice from a benefactor to the hands of poor people, mobilized a pork trading household to donate one quintal of pork for people to organize a Great Solidarity Festival and help the poor, etc.

Over the past five years, over 3.2 billion VND from the district Fund for the Poor plus donations has been used to build 81 “great unity” houses and repair three others with a total amount of more than 4 billion VND, visit and present gifts worth close to 4 billion VND to nearly 4,500 poor households on the occasion of the Lunar New Year, etc.

Especially, in the past two years, Fatherland Front Committees at all levels in the district jointly mobilized and received donations from organizations and individuals to assist poor, near-poor, and disadvantaged households affected by the Covid-19 epidemic with tens of tons of rice and many necessities.

Head of the Mass Mobilization Board, Chairman of the district Fatherland Front Committee Nguyen Dinh Dung said over the past time, thanks to the participation of the entire political system, especially the pivotal role of the Fatherland Front at all levels and member organizations, activities for the poor have had far-reaching effects in life.

Through the activities, people’s spirit of solidarity and mutual protection and help was promoted. In particular, poor households were helped with housing and economic development to escape poverty.
KIM ANH