Over the past time, Hai Duong has been making efforts and step by step taking many measures to control the air environment and reduce pollution.

Transport Enterprise’s trucks regularly spray water on roads in Hai Duong city to reduce dust
The provincial People's Committee has approved a network of water and air environment monitoring points in the province in the 2021 – 2025 period, including air sampling at 71 points four times a year, and implemented the project “Improving the provincial environmental monitoring capacity in the 2018 – 2020 period with orientation to 2025”.

The Department of Transport has counseled the provincial People’s Committee to issue a decision approving the project “Improving the quality of passenger transport by bus in Hai Duong province in the 2016 – 2020 period”.

The department has also strengthened the inspection of emissions from road vehicles to ensure the vehicles’ satisfaction of technical requirements on environmental protection, kept a close watch, and taken measures to prevent, limit, and minimize dust and emissions generated from the construction of traffic works.

According to statistics of the Department of Transport, by October 2022, businesses transporting passengers by bus in the province had replaced 72 out of 205 vehicles with new ones.

In the first nine months of 2022, motor vehicle registration centers in the province conducted verification nearly 80,000 times, in which close to 4,000 vehicles failing to meet emission standards were remedied and maintained by their owners and checked to meet the requirements before continuing to be used. 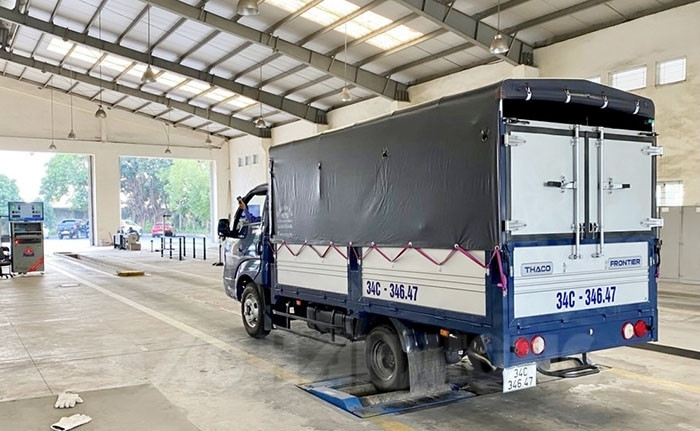 In the first nine months of 2022, motor vehicle registration centers in the province verified nearly 80,000 vehicles, 4,000 of which failed to meet emission standards. In the photo: Vehicle verification at Hai Duong Motor Vehicle Registration JSC.
Regarding traffic work construction, the Department of Transport selected units having modern construction methods and technologies, environment-friendly equipment and means causing the least pollution. The units were aware of and well observed regulations on dust and emission control during construction.

In Hai Duong city, to limit dust from urban roads, the city authorities have equipped Transport Enterprise with three sweepers to clean the surface of 316 streets with a total length of more than 174 km and five watering trucks to spray water on 57 main streets in the inner city with a length of nearly 45 km.

To date, 10 stations automatically and continuously monitoring the surrounding air environment have been installed in the province and transmitted data to the Department and Ministry of Natural Resources and Environment.

Large emission sources have been strictly controlled with 56 emission monitoring stations automatically and continuously monitoring the environment according to regulations.

A representative of the Environmental Protection Sub-department under the Department of Natural Resources and Environment affirmed that activities likely to pollute the air had been controlled more and more strictly.

Functional bodies regularly review and conduct planned or unexpected inspection of establishments at risk of polluting the environment or reported by people and strictly handle organizations and individuals discharging emissions beyond the permitted standard, causing air pollution.

As a result, air quality in the province has improved.
Hai Duong News