After a two-year hiatus because of the Covid-19 pandemic, this year, the Great National Unity Festival (GNUF) has been held across hamlets and residential areas in the province in an animated and joyful atmosphere. 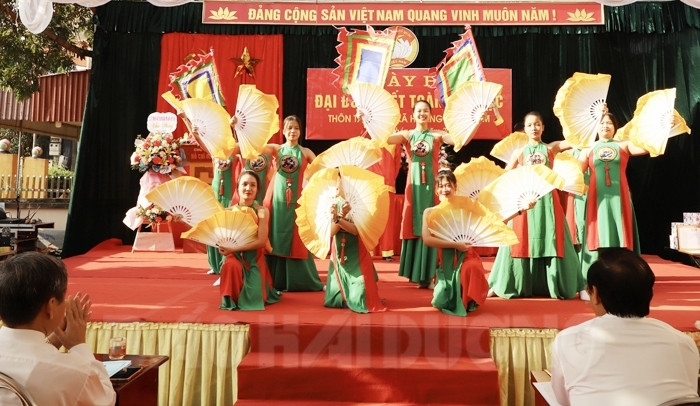 Many cultural, artistic, and sport activities are organized at the Great National Unity Festival by hamlets and residential areas in the province. In the photo: A musical performance at the Great National Unity Festival in Tan Lap hamlet, Hoang Hoa Tham commune, Chi Linh city
The GNUF has long been a major festival in the province’s hamlets and residential areas. The event is not merely an opportunity for localities to summarize one-year implementation of the campaign “All people unite to build new-style rural and civilized urban areas” but also an occasion to foster unity, neighboring affection, etc.

Before Covid-19 outbreaks, hamlets and residential areas often organized the GNUF around every mid-November. However, this year, the event was held in many localities in the province right at the beginning of November.

In the past two years, people had to live with restraints and limited spiritual life because of the pandemic. The reorganization of the great festival has created a vibrant atmosphere from urban to rural areas.

Van Cau hamlet in An Duc commune, Ninh Giang district, was full of colorful flags and flowers on the first days of November. Nguyen Trung Bai enthusiastically joined others in cleaning roads and alleys and hung the national flag with his own hands despite his 78 years of age.

“I’m so happy that I feel as if I were healthier. Life was boring in the past two years because of the pandemic, and now everyone can live in the same jubilant and exciting atmosphere as before,” said Bai.

In the yard of the cultural house of Tan Lap hamlet, Hoang Hoa Tham commune, Chi Linh city, not only youngsters, many elderly people also ardently participated in performances at the GNUF. The looks, smiles, and boisterous applause of the audience were mixed with music and lyrics. It's been a long time since Tan Lap residents stayed in such a joyful atmosphere. 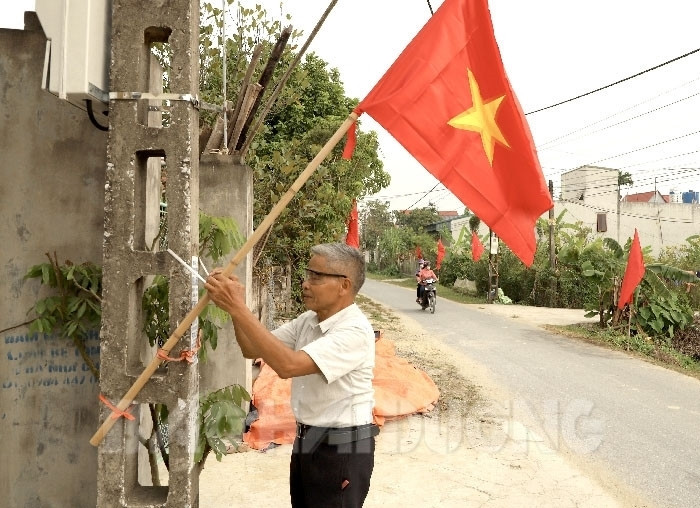 Nguyen Trung Bai, 78 years old in Van Cau hamlet, An Duc commune, Ninh Giang district, enthusiastically joins others in cleaning roads and alleys and personally hangs the national flag to celebrate the Great National Unity Festival despite his old age
This year’ special feature is that many localities in the province organized the GNUF according to the inter-hamlet and inter-residential area models. All six hamlets in Tan Trao commune, Thanh Mien district, simultaneously held the festival in one day, forming a large-scale bustling and joyful atmosphere.

“The vice chairman of the district People’s Committee took part in the festival with us and even went on stage to sing two songs. We were very happy because the leader showed attention, respect, closeness, and attachment to civilians,” said a resident of Van Cau hamlet.

Nguyen Van Khu was proud that Tan Lap hamlet was honored to welcome Mr. Le Van Hieu, Standing Deputy Secretary of the provincial Party Committee, Head of the Provincial Delegation of National Assembly Deputies, and leaders of the provincial People's Council and Chi Linh city at this year’s festival. “Everyone was very excited at the attention of leaders at all levels,” said Khu.

The festival is the glue that binds the community, strengthens solidarity, and creates a great motivation and spirit for people from all walks of life to enthusiastically emulate each other at developing economy and building an increasingly prosperous life.
TIEN MANH