“Xam” festival to give young artists a chance

Artists from across the country aged 7-70 will perform at the "xam" (blind wanderers’ music) festival from December 3-5 in the northern province of Ninh Binh. 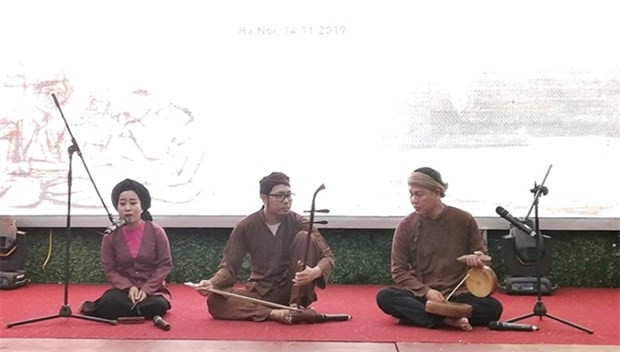 A "xam" band from Ninh Binh province performs at the press conference to announce the festival (Photo: VNA)
Fifteen clubs had registered to take part, according to Nguyen Manh Cuong, Director of Ninh Binh province’s Department of Culture and Sports.

The festival is designed to preserve and promote the art of singing and introduce the country's traditional heritage to international visitors, he said at a recent press conference in Hanoi.

“We host the festival because Ninh Binh is considered the cradle of the ”xam” singing, the hometown of Meritorious Artist Ha Thi Cau (1917-2013), the so-called 'last humane treasure of xam' and the most famous artisan of this genre,” he said.

“Xam” clubs and training classes have been opened for people who are interested in the art, including children and elders.”

After the festival, cultural departments in Ninh Binh and other northern provinces will send an application to the Ministry of Culture, Sports and Tourism for recognition of ”xam” as a national intangible heritage. It’s the first step to nominate ”xam” as an UNESCO heritage.

Each club will present three pieces, each 15 minutes long. The pieces include both traditional tunes and songs with new lyrics.

“The content of the songs is varied, showing the creativity and professionalism of modern artists,” said musician Thao Giang, head of the jury board.

“The songs reflect patriotism and urgent issues in society such as traffic accidents, sovereignty and maritime territory.”

Artist Nguyen Linh, 28, from Ninh Binh province, said the artists were eager for the festival as they considered it a chance to exchange with each other and promote the traditional art form.

“I have practised and performed ”xam” for more than 10 years. We want to preserve ”xam” and introduce the art to more people,” he said.

Apart from competitions, a seminar will be held in the framework of the festival with the participation of experts, cultural authorities and ”xam” artists. They will discuss how to promote the art form to the world and popularise it among the next generation.

Representatives of the clubs and the organising board will visit late artisan Cau’s house in Yen Mo district, Ninh Binh province.

“Xam” is a centuries-old singing style of the Vietnamese people. It was popular in the northern region and has long been recognised as an important part of national cultural heritage. A ”xam” band includes a singer and two to four instrumentalists.