This year's World Press Photo Exhibition has opened on the walking street by Hoan Kiem Lake in the centre of Hanoi, giving residents the change to see award-winning pieces of visual journalism. 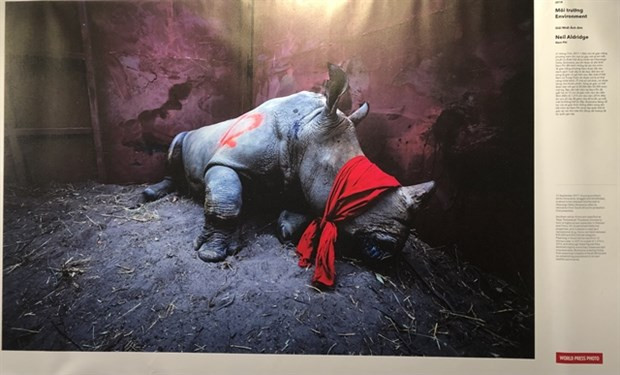 This year, the environment is most prominent in the World Press Photo Exhibition, according to the organiser
The exhibition Best of Three 2018 – 2020 organised by the Netherlands Embassy displays a collection of 62 works taken in the past three years across the world.

Photos displayed at the event are regarded as the most important stories of immersive and inspiring topics such as migration, protests and the environment.

The environment is most prominent in the 2020 exhibition. It is represented in categories beyond the Environment Category - Contemporary Issues, Nature, and Spot News and aims to call attention to the importance of the subject.

Meanwhile, protests and the role of youths in activating change were highlighted by the jury as a recurring theme in the entries, the organiser said.

Each year, the prize-winning pictures are presented in an exhibition visiting some 100 cities in about 45 countries over the course of the year and visited by more than 4 million people worldwide.

This year, the World Press Photo exhibition in Hanoi is one of the very few exhibitions outside Europe and the third exhibition of its kind in Hanoi.

A ceremony was held on Friday night at the Martyr Monument Square on Hang Dau Street to mark the opening of the exhibition and drew representatives from the Ministry of Culture, Sports and Tourism, city authorities, foreign embassies and international organisations in Vietnam.

“It is a well-known saying than an image says more than 1,000 words. The pictures in this exhibition are prime examples of telling their story across cultural and language barriers”, said Ambassador of the Kingdom of the Netherlands to Vietnam, Elsbeth Akkerman.

Speaking at the opening ceremony on November 20, the ambassador stressed the meaningful concept of each picture.

"Each picture exhibited here tells a story/stories of ordinary people in extraordinary circumstances, stories about how we as people relate to the planet we live on. Stories of sadness, struggle and grief, but recognised, and we can relate to on a personal level", she said.

"The pictures are a celebration and acknowledgement of the importance of photography, photojournalism and diversity allowing people to tell the story they need to tells thus enable us to hear the things we need to hear," she said.

"Photography is an especially effective way of communication because it eliminates the boundaries of culture and language. Photojournalism in general and the wonderful examples of the pictures we show today offer us a window to the world that we cannot see ourselves at this point in time," she added.

The event taking place from November 20-29 is one of the meaningful activities that enrich the agenda of Hanoi being in UNESCO’s Global Network of Creative Cities.

The values of the World Press Photo

In the last three years, the World Press Photo Foundation received around 75,000 images each year from at least 125 countries.

The mission of World Press Photo is to connect the world to the stories that matter and at the same time, embraces accuracy, transparency and diversity.

"In this exhibition, we also see stories that reflect what we consider to be 'constructive journalism' - work that puts problem-solving at the centre of the narrative. Take for instance the story about a football team from Benin, Africa, that’s set up with the aim of giving young women more control over their futures through sport," said Suzan van den Berg, Exhibitions Coordinator for World Press Photo.

Tour and educational side events

A sideline programme will be held during the nine days of the exhibition including the workshop 'Storytelling Through Portraits', an online panel discussion 'Utilising Online Platforms for Photojournalism', a portfolio review, projection night and an artist talk show next weekend.

Free guided tours will also be organised at 10am and 2pm for those interested in learning more about the stories behind the pictures, according to the organiser.

For more information on the side events, visit matca.vn/en/trien-lam-anh-bao-chi-the-gioi-2020.
VNA