Vietnamese singers have developed new music projects to entertain and inspire their fans during the COVID-19 pandemic. 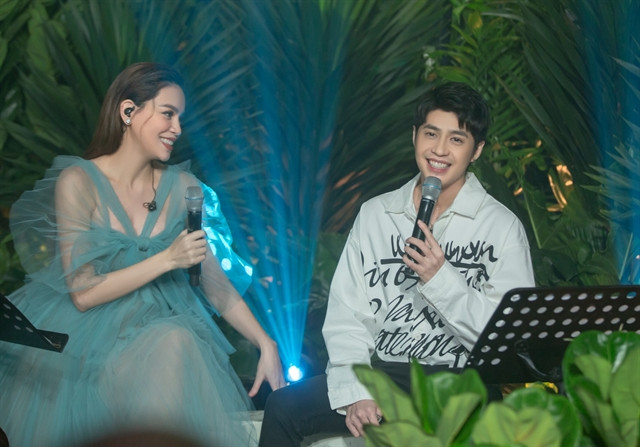 Ha and her staff have spent half of a year to prepare for the project, which consists of an album, private shows, studio sessions and a documentary.

Ha recorded the songs with a live band under instructions of music producer Hoai Sa who made music for pop stars like Thu Minh and Vu Cat Tuong.

“I have practised with the band until nighttime for days to bring a quality and professional album to my fans,” said the 36-year-old singer.

On August 13, she released her first studio session for the sad ballad Cu Tuyet (Denial) by Vuong Anh Tu on YouTube, which has had more than two million views.

Ha’s first private show on August 19, which was live streamed on her Facebook page, attracted 300,000 viewers.

In the show, Ha sang the songs from the album, including Cu Tuyet and Cang Truong Thanh Cang Co Don (More Mature I Am, More Lonely I Feel) by Nguyen Hong Thuan.

“I know the Vietnamese music scene is changing. But as a professional singer, I pay attention and care for my products to satisfy the audience’s tastes,” Ha said, adding that she and her staff are working on a special concert Love Songs set for next year.

Ha began her singing career in 2004 after working as a model. Her first album, 24 Gio 7 Ngay (24 Hours 7 Days), helped to establish herself.

She was chosen to take part in the Asia Song Festival in Seoul the same year.

In 2016 and 2017, Ha organised the "Love Songs” concert tours to Da Nang, Ha Noi and Ho Chi Minh city; and the US, Australia, Germany, France and the Netherlands.

She has won prestigious prizes like best singer, best album and best concert of the year, given by Ho Chi Minh city Television, Voice of Ho Chi Minh city and The Thao & Van Hoa (Sports and Culture) newspaper.

Chung said: “The song calls for citizens to be together with the health sector to win the war against the pandemic.”

“It sends Vietnamese singers’ love to frontline workers across Vietnam, especially in Da Nang and central provinces where COVID-19 has broken out,” he added.

Through the music project, Chung and the artists have raised VND165 million (US$7,000) for a fund to purchase protective medical equipment for health workers in outlying hospitals in Da Nang city and Quang Nam province

Chung began his career in 2003 and became famous for love ballads, including top hits such as Vang Trang Khoc (Tears of the Moon), Chiec Khan Gio Am (Beautiful Scarf) and Chuyen Tinh Duoi Mua (Love in Rain).

His music is pop and R&B, with Vietnamese folk elements.

Chung is also famous for his songs for children, in particular Nhat Ky Cua Me (Mom’s Diary) about a mother’s love, released in 2011 by well-known singer Hien Thuc.