People's Artist Thuy Mo and her fate with cheo

Being conferred the People's Artist title on at the age of 66, former Deputy Director of the Provincial Cheo (Traditional Operetta) Theatre Thuy Mo considers it the fruit of her whole life devoted to art. 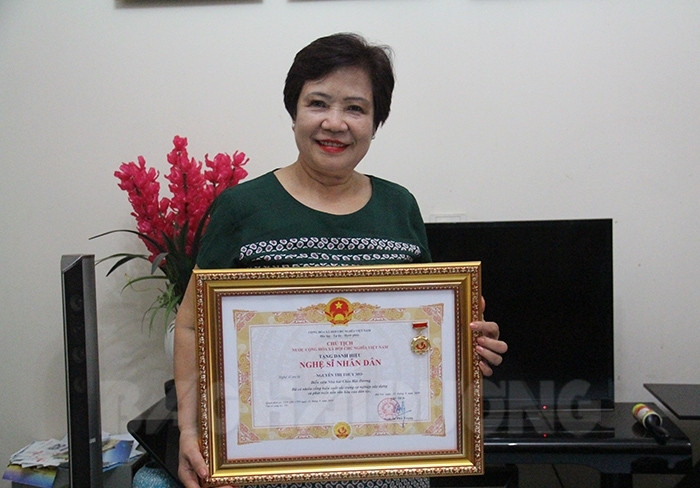 Receiving us in a house right next to the Provincial Cheo Theatre, People's Artist Thuy Mo surprised those in front of her since she was much younger than her age. Her freshly-granted People's Artist certificate was formally put in the living room.

She was born into an artistic family. Her father, an amateur actor of an ensemble in Tien Dong commune (Tu Ky), died early when Thuy Mo was only six years old.

With a fatherless life and the family's economy totally depending on her mother, her childhood was associated with many difficulties. Yet, she and her two sisters still had a passion for cheo.

In 1971, a turning point came to Thuy Mo when she performed at a public musical festival of Tu Ky district. Though familiar with Thuy Mo's cheo singing, Tien Dong residents at that time were still surprised at the image of a young soldier going out in the La Thu Dau (First Letter) piece. Only when Thuy Mo began to sing with a limpid and sweet voice did they surprisingly realize her.

After the piece, everyone unceasingly heaped praise on the handsome soldier with a beautiful voice while Thuy Mo caught the eye of officials from the Hai Hung Culture Department.

Right after the show, the Phu Hai Cheo Troupe sent staff members to her home to hear Thuy Mo sing. As soon as she began to sing the first song, everyone was conquered. After that, Thuy Mo officially started working for the provincial cheo troupe.

Later, Phu Hai and Long Hung Cheo Troupes were merged. Though there were many good actresses, Thuy Mo was still chosen to play main roles by directors.

With a talent for acting and a good singing voice, Thuy Mo has a series of main roles making her mark like Cuc Hoa in Tong Chan Cuc Hoa, Buoi in Huong Buoi (Pomelo Scent), or Y Lan in Nhiep Chinh Y Lan (Regent Y Lan). The roles that made up Thuy Mo's fame are Lan in Cau Chuyen Lang Nhan (Story of Nhan Village) and Ben in Ni Co Dam Van (Nun Dam Van).

Despite such success in her career, not many people know that she went through many hardships to stick with the profession.

Thuy Mo got married in 1972 but could not live with her husband. He worked in Tu Ky while she lived alone in the collective quarter of her cheo troupe.

Their three children were born one after another, weaned when they were only two months old, and followed their mother wherever she went for performances. When her children were seven months old, she had to send them home to be raised by her husband. Not until 1983 did her family officially reunite.

Like the families of other cheo artists, Thuy Mo's family had to do many jobs to earn their living but she did not give up any role. In the years her cheo troupe went on tour to serve the army and people in Dong Ha battlefield (Quang Tri) or later people in a new economic region in the Central Highlands, she was not absent in any performance.

Before retiring in 2008, she was Deputy Director of the Provincial Cheo Theatre for more than three years.

Despite retirement, People's Artist Thuy Mo has never stopped her devotion to cheo.

"Nowadays, it is difficult for traditional art to find a foothold and young people also turn their back on cheo," she said; therefore, as long as she is alive, she still wholeheartedly teaches the younger generation.

At present, she has the Folk Song Singing and Playing Club, the Tam Duc Cheo Club, and a cheo class for visually impaired people. Gathering cheo lovers, her clubs often go on tour to serve the poor free of charge.

To her, art has no place for laziness, so she always reminds cheo lovers and learners to learn and practice it seriously. Therefore, all of her three children who chose to follow the artistic path have also risen to fame. In particular, her eldest daughter, Meritorious Artist Minh Phuong, was a promising actress of the provincial cheo very early and is now the head of the national music and song troupe of the Radio The Voice of Vietnam's Theatre.

As for People's Artist Thuy Mo, she confided: "My whole life has been devoted to cheo, so I have nothing to regret now."
HUYEN ANH