I met Nguyen Huu Thinh for the first time at the Con Son Literature and Art Awards ceremony in 2016. 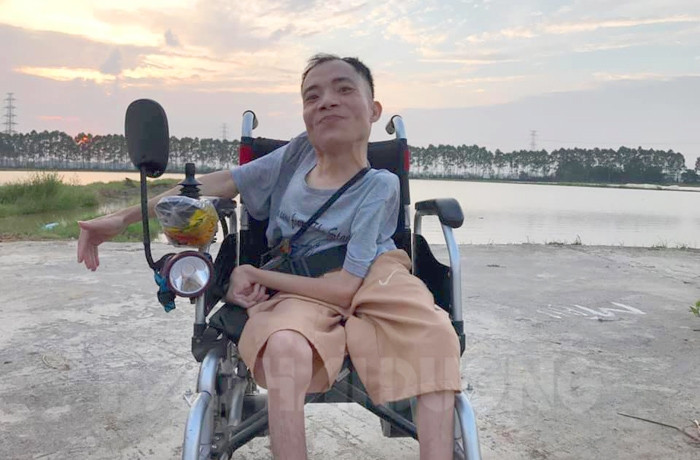 Nguyen Huu Thinh found the joy of life when coming to poetry
At that time, Thinh and I were granted C prizes. I was touched by the image of a poet sitting in a wheelchair pushed up by his father to receive the prize.

Thinh was born healthy like many other children. At the age of 8, Thinh fell ill. His entire body convulsed, his arms and legs trembled, and his tongue was tied, making him unable to speak.

His parents took him to many hospitals for treatment and emptied out every thing with the only hope that their son would recover. However, Agent Orange which was passed to Thinh from his father, a former Truong Son soldier, then worked and could not be cured.

"It felt like being shot in the heart by the last bullet when I saw my son change from a vivacious boy running all day and always laughing happily to a curled-up person with both legs and one arm gradually paralyzed and only several fingers of the other arm able to move," said Thinh's father.

The hospitals discharged him. The 8-year-old boy had to drop out of school. Thinh was tied to a small bed and walls with every personal activity depending on others. Upon retirement, Thinh's father became his legs and arms.

Agent Orange only deformed Thinh's body but could not crush his sensitive soul and progressive spirit.

When I asked the time Thinh started versifying, he answered with a very difficult voice: "A neighbor who was a math teacher often came. He taught me to play chess and write poems. He let me read any book he had."

Just like that, Thinh has taught himself by reading books, fostered his soul with collections of poems, and enlightened his own mind with literature and knowledge.

He writes poems and ceaselessly searches and hones himself to have good verses.

Thinh's poems express love of life, nature, and human and love of couples and are always rich in emotions, unique in expression, and elaborate and subtle in the use of words.

Readers of Thinh's poems will never think that they were written by a person with disabilities, and no one will know the author of those collections of poems is a victim of Agent Orange.

In his quiet journey to and with poetry, Thinh must constantly confront sudden and persistent fatal illness. There were times he had to be hospitalized for a long time but still had poetry by his side.

Thinh came to poetry and relies on it to live. Poetry has sublimated him in life and connected him with friends.

Thanks to love and help from artists and friends, Thinh has had a new wheelchair. Every afternoon, Thinh can use the wheelchair to go to the fields for sightseeing or to Cam Giang district town for pleasure and visit Cam Giang station and the garden in Thach Lam's house.

When I asked Thinh why there were so many poems about love, which are pure and romantic but not tragic or sorrowful even in case of breakups, Thinh cheerfully said: "I have a friend online who also likes poetry. We like each other and often write poems for each other."

Seeing an open Thinh, I asked between jest and earnest: "Is that your lover or your muse?"

"If you love someone, tell us, we will hold your wedding this August," Thinh's father teased him.

Thinh smiled and opened his notebook to read his new poem to me...
NGUYEN THU HANG