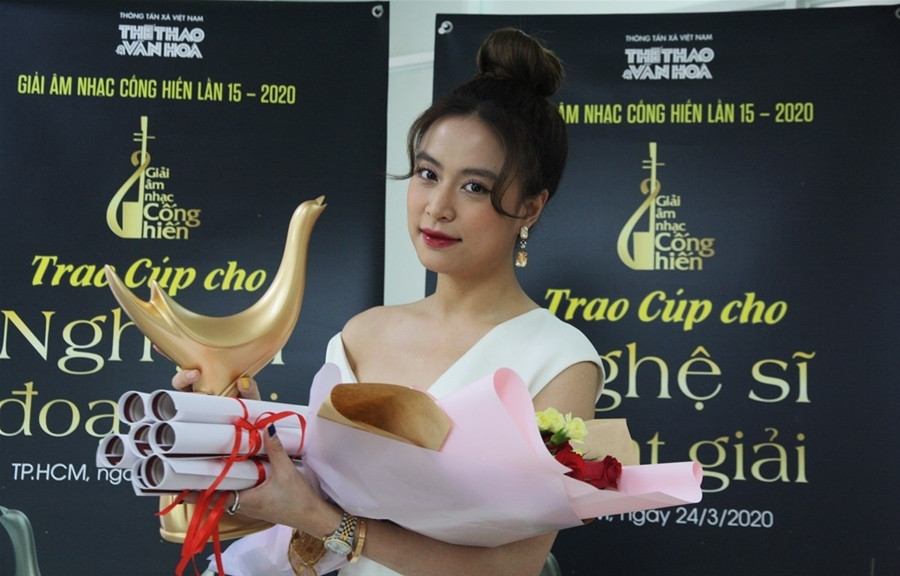 "De Mi Noi Cho Ma Nghe" was a hit after it debuted last year. The pop song was composed by DTAP Team about a young girl who loves freedom and doesn't want to get married at young age.

The lyrics are vivid and funny, inspiring listeners to sing along. The music video for the song was launched last June, using Vietnamese classical literature works such as Lao Hac (Old Man Hac), Tat Den (Turning Off Light) and Vo Chong A Phu (A Phu Couple).

Launched last October, "Hoang" is a unified concept album about a young woman who experiences many ups and downs in her life. The album received positive reviews in national music publications, on Facebook and on blogs.

The album combines electropop and electronic dance music, according to Billboard Vietnam. The product highlights folklore materials such as fairy tales, proverbs, literary works and religion. It is still modern and joyful.

All songs on the album rank in the top ten on both iTunes and Spotify Vietnam.

In the Show of the Year category, the vote has ended in a tie for the first time ever between solo concerts "Truyen Ngan" (Short Story) by singer Ha Anh Tuan and "Tro Ve" (The Return) by singer Tan Nhan. Both received an equal number of votes at 28, making the organizers to exercise their casting vote for the first time in the award’s 15-year history.

DTAP Team, comprising Thinh Kainz, Kata Tran and Tung Cedrus, was named the Best Producer of the Year while the Best New Artist of the Year and the Composer of the Year went to singer Amee and composer Phan Manh Quynh, respectively.

Due to the COVID-19 outbreak, the award ceremony was canceled.

The annual Devotion Music Awards was launched by Vietnam News Agency’s The Thao & Van Hoa newspaper in 2004 to promote Vietnamese music and honour artists with significant contributions to the industry.

This year, the voting was held online for the first time because of concerns over the wide-spreading COVID-19 pandemic. A total of 95 ballots have been sent via email to reporters in Hanoi and Ho Chi Minh City who voted in nine categories.
VNA