​More than 150 artefacts and documents related to Vietnam’s August Revolution and National Day are being displayed at an exhibition at the National Museum of Vietnamese History in Ha Noi. 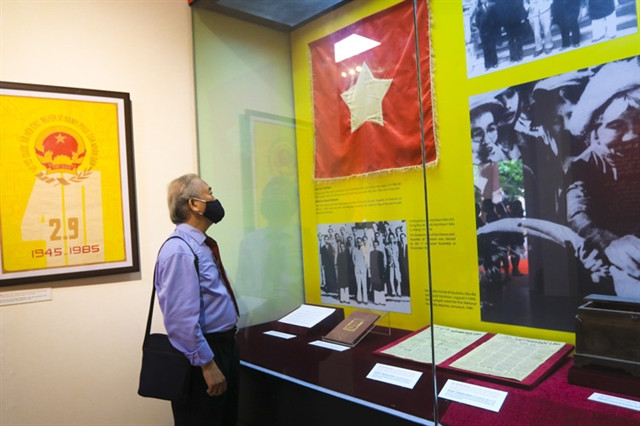 Independence Day-2nd of September exhibition features artefacts and documents telling stories about Vietnam’s successful August Revolution 1945 and National Independent Day. VNA/VNS Photo Le Phu
Speaking at the opening ceremony on Tuesday, director of the museum Nguyen Van Doan said that the Independence Day-2nd of September exhibition aims to help the public, particularly young people, better understand a historical milestone of the nation – the August Revolution of 1945 - as well as the strength of national solidarity and the value of independence and freedom.

“The heroic days of August 1945 will always be a shining milestone in national history and leave a very valuable lesson for the Vietnamese revolution.

"Continuing the tradition of patriotism, promoting the spirit of the August Revolution and under the leadership of the Party, Vietnamese people have overcome all difficulties to defeat all invasions, defend national independence and conduct the cause of renewal and development of the country,” Doan said.

The artefacts and documents are displayed in two parts – Strength of the Nation and Independence Day-2nd of September.

The Strength of the Nation part features collections of resolutions, directives, newspapers, leaflets, weapons and flags, which demonstrate the Party and President Ho Chi Minh’s leadership in uniting Vietnamese people from all walks of life to launch the August Revolution.

Two notebooks recording the work of President Ho Chi Minh from September 2, 1945 to October 17, 1945 are also being displayed in public for the first time at the exhibition.

Also at the opening ceremony, the National History Museum received a number of artefacts donated by individuals and museum collaborators.

Tran Ngoc Quyen, a former Counselor of the Embassy of Vietnam in Germany, presented two reliefs the Democratic Republic of Germany gave to significant contributors to Vietnamese movement in 1960 and one Ho Chi Minh Medal issued in 1980 by the Solidarity Committee of the Democratic Republic of Germany on the 90th anniversary of President Ho’s birthday.

The exhibition will open until the end of December.
Vietnamnews