The Central Highlands province of Dak Nong on November 24 received a certificate recognising its geopark as part of the UNESCO Global Geoparks Network. 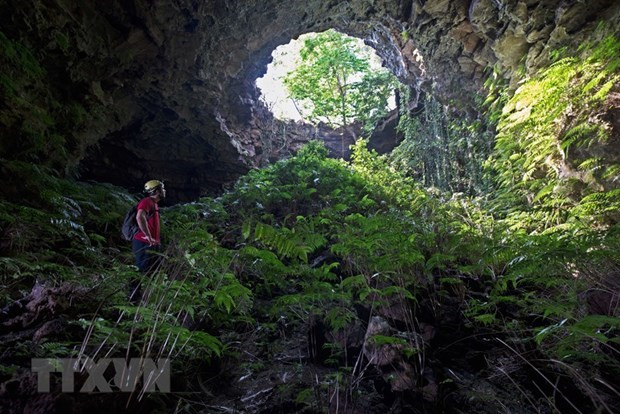 A volcanic cave in the Dak Nong Geopark

The Dak Nong Geopark is the latest member of the global network and the third to obtain this title in Vietnam.

It covers more than 4,700 sq.km. of land in six of the eight district-level localities in Dak Nong, namely Krong No, Cu Jut, Dak Mil, Dak Song, Dak G’Long, and Gia Nghia, equivalent to two-fifths of the province’s total area.

According to domestic and foreign scientists, there are 65 heritage and geomorphological sites in the Dak Nong Geopark, including volcanic craters, volcanic caves, and waterfalls.

Notably, this geopark is home to the largest system of volcanic caves in Southeast Asia, with more than 50 caves and a total length of over 10,000m.

Once coming to the Dak Nong Geopark, visitors can also explore the Central Highlands’ space of gong culture – a UNESCO-recognised masterpiece of the intangible heritage of humanity, the culture of M’Nong people – the ethnic group that has the longest residence history in the province, along with the culture of other ethnic minorities.

UNESCO Representative in Vietnam Michael Croft said the Dak Nong Geopark boasts the combination of natural beauty and locals’ unique culture, both of which need to be preserved and capitalised on via economic and tourism activities.

He highlighted the importance of local residents’ participation and pledged UNESCO’s close cooperation to help tap into tourism potential of this geopark.

On July 7, the Programme and External Relations Commission of the 209th UNESCO Executive Board approved the Global Geoparks Council’s proposal to recognise the Dak Nong Geopark as a global geopark,

Earlier, the Dong Van Karst Plateau in Ha Giang province and the Non Nuoc Cao Bang Geopark in Cao Bang province, both in the north of Vietnam, had been named members of the Global Geoparks Network.