Trade unions care for employees to cope with Covid-19

The Workers' Month this year came amid great impacts of Covid-19 on enterprises' production and business and employees' jobs. 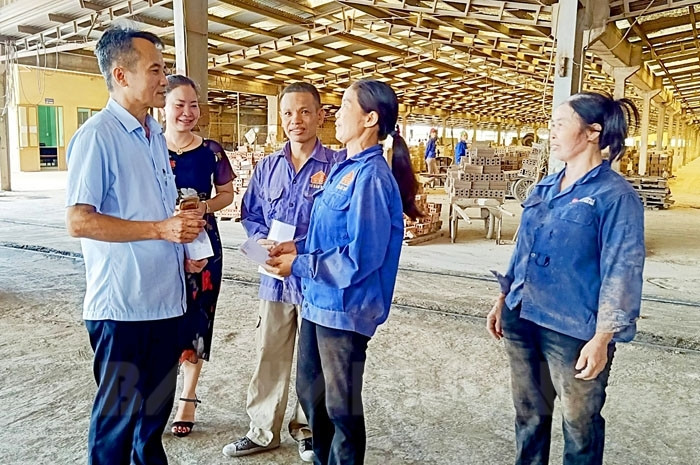 Officials of the Trade Union of Nam Sach district encourage and present gifts to disadvantaged workers of Yen Thanh Co., Ltd.
Trade unions at all levels in Hai Duong province have made appropriate changes to better care for employees.

Standing side by side with businesses

At the end of April, in the face of great impacts of Covid-19 on employees, the Vietnam General Confederation of Labor decided to add the theme: "Job maintenance – Labor safety – Stable income."

Concretizing this spirit, the Hai Duong provincial Confederation of Labor (CL) directed all-level trade unions of enterprises affected by the epidemic to proactively coordinate in making plans to maintain jobs for workers and improve their supervisory role when business owners reduce the number of employees.

At enterprises having to suspend production, trade unions should proactively collaborate with appropriate authorities and employers to introduce jobs and find ways to support employees.

In Hai Duong, trade unions have promptly offered a lot of measures to help enterprises overcome difficulties not only in the Workers' Month but also throughout the Covid-19 affection period.

Especially, on April 7, as soon as hearing that about 1,800 Hai Phong laborers and some from Thai Binh could not go to work for enterprises in Tu Ky district, the district LC expeditiously counseled the district People's Committee on handling.

At the request of the district LC, on the same day, the district People's Committee sent official dispatches to functional agencies of Hai Phong.

After that, Hai Phong authorities eased some epidemic prevention regulations, so the workers could move around and their jobs were not greatly affected.

In the face of difficulties, the role of trade unions to employees and enterprises becomes more and more meaningful.

On the first days of this Workers' Month, trade unions higher than the grassroots level came to encourage enterprises and presented gifts to disadvantaged workers. Typical examples are the Trade Union of the industry and trade sector, the LCs of Kinh Mon provincial town and Ninh Giang district, etc. This made a good impression and was highly appreciated by business owners.

The impacts of the epidemic on enterprises' production have caused many laborers to lose their jobs or work sporadically, seriously affecting their income. Trade unions at all levels in the province have had a lot of practical actions to share difficulties with workers.

Similar to many other businesses, Sees Vina Co., Ltd. in Minh Duc commune (Tu Ky) could not avoid bad effects of the Covid-19 epidemic. The company had to dismiss 575 employees early this May despite its unwillingness.

Nguyen Duc Thinh, Chairman of the company's Trade Union, said the Trade Union's Executive Board had counseled and coordinated with the company's leadership to seek ways to help the workers.

The Trade Union spent VND200 million, the company paid VND200 million, and the company's seniors from deputy team leaders contributed more than VND220 million. The money was used to support the dismissed employees with VND500,000 – 1,600.000/ person (based on employee groups with different durations of labor contracts).

"This is an effort of the grassroots trade union to share difficulties with the employees. If the company later restores production, the union will recommend readmission of those desiring to work," said Thinh.

There are not many enterprises in Ninh Giang, but the district LC still closely monitors difficulties of workers.

Recently, LC officials have visited and encouraged a number of disadvantaged laborers losing their jobs and businesses affected by the epidemic.

Receiving a gift from the district LC officials at home, Nguyen Thi Phuong in Ninh Hai commune (Ninh Giang) emotionally said she had been off work since March. With neither work nor income, the life of Phuong and her two children was extremely difficult. The attention of trade unions relieved her sadness and lit up the hope of being supported with a job in the coming time to guarantee their life.

Influences on jobs have made it more difficult for workers living in boarding houses. The provincial LC has surveyed such workers to make a practical support plan.

Thanks to mobilization of trade unions at all levels, 114 landlords have pledged to reduce room rents by 25 – 30% within three months (from April to June) for lodging workers.

It is expected that with the attention of trade unions at all levels, authorities and sectors will create more conditions, and enterprises and employees will soon stabilize production and life.
THANH NGA