More than 80 per cent of strikes in the first half of the year occurred at FDI enterprises. 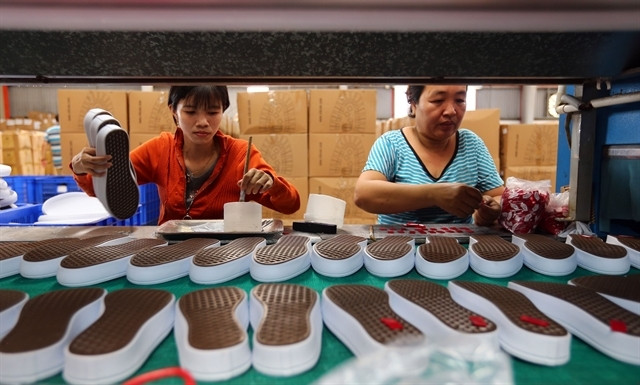 Many strikes have occurred at foreign-invested leather and footwear companies. Photo for illustration: VNA/VNS/Danh Lam
According to a report from the Ministry of Labour, Invalid and Social Affairs (MoLISA), as many as 67 strikes occurred in the past six months, a drop of one compared to the same period last year.

FDI enterprises from South Korea and Taiwan (China) accounted for 16 protests each, while the number at companies from mainland China totalled 10.

Strikes at private enterprises made up the rest with 17.9 per cent.

Most strikes took place in labor-intensive businesses, led by the garment sector with 28.36 per cent and the leather and footwear sector with 19.4 per cent.

Nearly 90 per cent of protests occurred in the southern region. About 470 workers on average joined strikes that lasted from two to three days. Most of them did not comply with the Government’s regulations.

According to MoLISA, disputes over benefits and rights were the common causes of the strikes.

Enterprises’ failure to consult workers over wage adjustments, ensure meal quality, or engage in serious dialogue and negotiations with workers and workers’ unions sparked the protests.

Local authorities helped to settle the conflicts as mediators instructed both sides to properly negotiate and engage in dialogue with workers to address their demands.

A macroeconomic report released in mid-July by the Institute for Economic and Policy Studies (VEPR) revealed that in the first half of 2019 the FDI sector played a crucial role in economic growth through exports.

More than 1,700 new FDI projects were licensed with total registered capital of about $7.4 billion, down 37.2 per cent from last year.
Vietnamnews