Trips with colleagues often bring a happy and united atmosphere to laborers. After returning, they will work more enthusiastically. 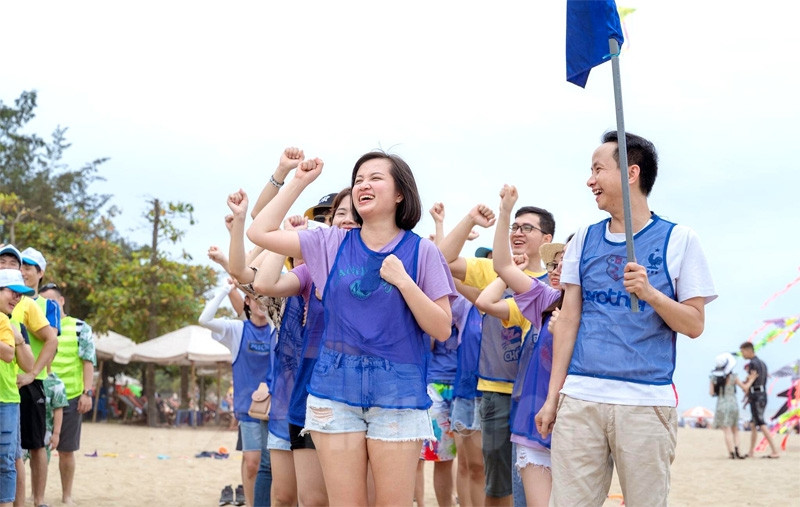 Workers of Brother Machinery Vietnam Co., Ltd. excitedly join in a group game at a tourism site
However, this year, these activities must be stopped in many places because of the Covid-19 pandemic, making employees regretful.

Over the past time, numerous units in Hai Duong province have let their employees go sightseeing and traveling. The program may be fully or partly funded by the units. Last June and July, when the Covid-19 situation settled down, the plan was realized in many areas.

In early July, Minh Phu Steel JSC. in Cam Giang district organized a holiday in the tourism site of Cua Lo provincial town in Nghe An province for its employees. All officially-contracted laborers of the company were entitled to the trip.

90% of the cost was paid by the firm, and the rest by its trade union. Children five years old or younger could accompany their parents free of charge. Those making advanced working achievements could bring a relative along for free.

Arriving at Cua Lo sea, the company's employees rested, swam in the sea, and participated in a number of exciting group games like tug of war and musical exchanges.

Chairman of the company's trade union Pham Ngoc Tung said during the trip, the employees were very happy. Upon returning, their enthusiasm for work increased. In questionnaires distributed by the trade union, everyone expressed their hope that the company would always maintain this activity. Some suggested that the company should improve the quality of meals and thoughtfully prepare drinking water for the following trips to be complete.

The program was co-organized by the company and its trade union. In which, the trade union funded 40% of the cost.

The company chose a prestigious tour organizer to ensure good regimes for its employees throughout the trip and held some joyful group games suitable to everyone.

All female workers on maternity leave unable to participate were given separate gifts by the trade union and the company.

Trips with colleagues organized by companies bring comfort and joy to their employees. "My company annually organizes tours for us. Last June, a vacation was held in Cat Ba, Hai Phong city. These trips are occasions for us to temporarily stay away from work, so we are very happy and relaxed. After the trips, we are more attached to our company," said Tran Thi Hoa, an employee of Yody Fashion JSC.

In recent days, the Covid-19 situation has become complicated. Many units' plans must be stopped to ensure pandemic prevention.

This time, Hai Duong Water JSC. decided to give financial support to vacations of its employees. 23 member units of the company unanimously organized suitable trips for their employees based on support levels. Several units held vacations for their employees in June and July while most of the rest have just booked tours.

According to a representative of the company's trade union, stop at this time has caused losses for many member units because they booked cheap tours to save money, so there would be neither refund nor flight rescheduling. Employees registering to bring relatives along now must accept loss of money.

VNPT Hai Duong planned to organize a tour to several southwestern provinces for its employees at the end of this August. The employees registered to go in two 30-member groups. Though the departure dates are quite far away, the unit has decided to stop the activity in the face of complicated developments of the Covid-19 pandemic.

In the past, Sees Vina Co., Ltd. in Tu Ky district often provided financial support for production groups to organize sightseeing and traveling for workers according to their wishes and suitable to their funds. They were excited to participate every year.

Regretfully, there will be no such activity this year. Right at the beginning of the year, the company's production was severely affected by the Covid-19 pandemic. To date, the firm has had to dismiss hundreds of workers for lack of orders. At present, the company is giving priority to finding ways to maintain production and create stable jobs for employees, so it fails to keep the appointment with its workers.
THANH NGA