The COVID-19 situation in HCM City is under control following four recent community-transmitted cases, the city Centre for Diseases Control and Prevention has said. 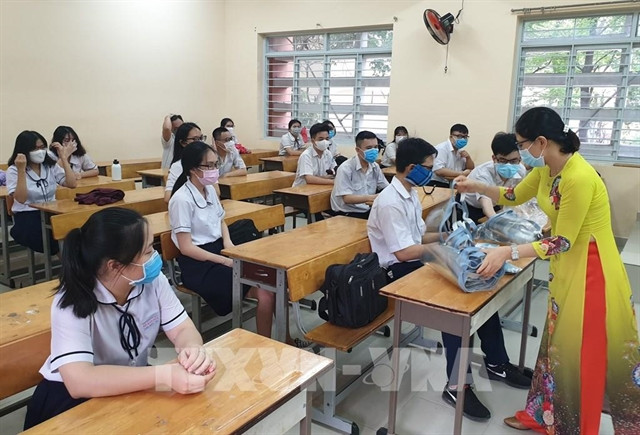 As of December 7 (Monday), the city has not recorded any case involving community transmission, according to the centre.

The city continues to provide surveillance of international flights with passengers staying in the city, including taking samples for testing of the virus.

The city is also continuing to require people from other countries who have entered Việt Nam to quarantine, and is monitoring people who may be at high risk of contracting the virus.

People who have finished their designated quarantine time in other provinces and have returned to the city are also being monitored by local health officials and authorities.

The centre said another outbreak could occur and that people must wear masks, wash hands with sanitiser, and keep a safe distance. They must also avoid gathering in groups and fill out health declaration forms, if requested.

On December 7, students at several schools and universities in Ho Chi Minh City returned to classes after the schools were closed last week due to to the new COVID-19 cases.

Lưu Hồng Uyên, head of the educational division in District 6 where one of the four COVID-19 cases resides, said that all four schools in the district have now reopened.

However, several students living in isolated areas are still at home and studying online. Students and teachers who are F1 and F2 cases (first and second generation cases related to the original F0 infected person) are still in quarantine.

Students at the HCM City University of Technology resumed studying on December 7. They were allowed to stay at home after 25 students and lecturers were determined to be directly or indirectly related to the new COVID-19 cases discovered from December 2-6. These 25 people are in quarantine and are being monitored by health officials.

As of December 3, the city had 8,211students from kindergartens, primary, secondary and high schools stay at home because of COVID-19. Eight of these schools closed, while 195 schools closed several classrooms. But all of these schools have reopened. As many as 160,904 students at universities and vocational training schools in the city were allowed to stay at home during the period but have now reopened.