Work pressure and low income have been making the garment industry face the risk of labor shortages. 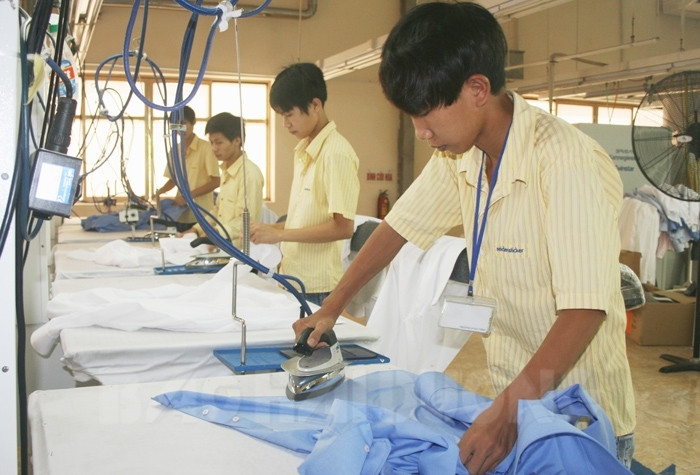 Late last February, Oxfam and the Institute of Workers and Trade Unions (Vietnam General Confederation of Labor) jointly published the survey "The Consequences of Low Wages."

69% of the garment workers interviewed said their income was not enough to cover daily life, 31% could not save anything from their monthly salary, and 37% were always in debt to make up daily expenditure deficits.

Besides, overtime work was quite stressful. Up to 65% of the workers said they often had to work overtime while 28% were worried that working too many hours a day might affect their health.

Though being conducted among only 157 people, the survey somewhat reflects the current income and working intensity of garment workers.

There are enterprises using up to thousands of workers in many industrial zones, industrial complexes, and localities, such as the limited liability companies of Full Wealth International Garments (Nam Sach), Michigan Hai Duong (Chi Linh), and Sejin Vina (Ninh Giang).

The income and working time of garment workers in the province are basically similar to figures in the above survey.

Nguyen Thi Le in Binh Han ward (Hai Duong city) has been a garment worker for about 20 years at three different companies. Regardless of the workplace, her working time lasts from around 7 am to 6 pm.

In addition, when there are many goods, she will have to work overtime and return home later. Although Le is a skilled worker, her income is only enough to raise two children who are in university and junior high school.

It can be seen that because of much pressure at work like much working time, low income, only a few satisfactory regimes implemented by employers, etc., most of recent collective stoppage cases in the province are related to workers in garment and leather shoe making industries.

Since the beginning of the year, there have been two collective stoppage cases at the limited liability companies of Quang Phong (Thanh Mien) and Mastina (Ninh Giang), both of which are in these industries.

At present, the garment industry is still using a lot of manual labor.

According to some labor analysts, the 4th industrial revolution has affected many trades; however, manual labor cannot be replaced in various stages of the garment industry in the world in general and Vietnam in particular.

Therefore, this industry's demand for labor remains high, especially since the CPTPP came into effect. Hence, the majority of large-scale garment companies in the province need to recruit workers at any time.

In many rural areas, garment processing workshops have also been opened, each of which attracted dozens of workers.

Laborers, especially young ones, have a wide choice of jobs. Due to the pressure and low income, many laborers are not interested in this profession.

To have workers, a lot of businesses have to carry out recruitment phases outside the province, even in Northern mountainous areas and the Central region.

Vinh Thinh Export and Trading Garment Company has operated in Hai Duong city for about 20 years. Presently, it is difficult for the company to recruit employees.

Director Nguyen Duc Thinh said though the company was applying many good regimes for employees, it could not avoid the loss of labor.

Formostar Garment Vietnam Co., Ltd. is expanding production. Despite its ability to develop more, the enterprise's construction scale only fits about 300 employees for fear of difficult recruitment at the moment.

The company has applied the policy of rewarding employees successfully introducing new workers to the enterprise with money in order to find enough laborers.