Children enjoy toys made of old tyres in Hai Duong

Hundreds of children in kindergartens and residential areas in the northern province of Hai Duong’s Gia Loc and Thanh Ha districts have enjoyed new swings, seesaws and balance paths made of old tyres. 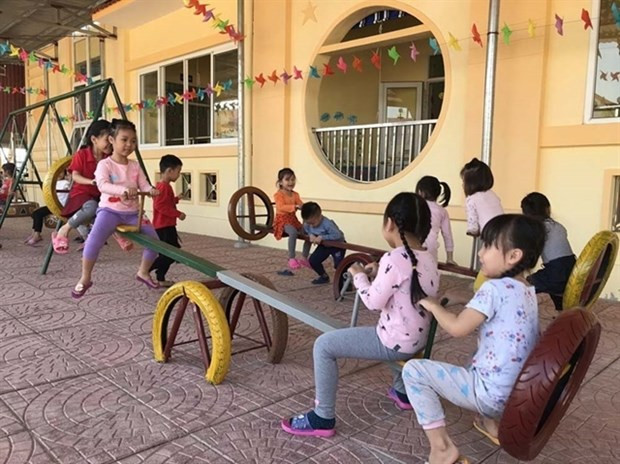 Swings were very good for the children’s physical improvement while seesaws and balance paths helped them improve their intelligence and creativity when they played together, she said.

Nguyen Thi May, vice-principal of Gia Xuyen Kindergarten in Thanh Ha district, said the school was large so it needed many toys.

The toys made of old tyres were quite strange, so the children were very interested in them, she said.

The swings, seesaws and balance paths were created by members of the district’s Youth Union and donated to the kindergartens and residential areas, following the programme 'The second journey of tyres', launched by the provincial Youth Union in May.

The programme, which is set to run until December 2022, aims to respond to the Ministry of Natural Resources and Environment's anti-plastic movement.

After receiving the old tyres, the members of the youth union would clean and sort them, he said.

The old tyres were painted in many colours with attractive vivid patterns and animals on the swings’ surface, he said.

Diep said at first, with no experience in creating toys for children, members of the youth union had to search online about how to make toys from old tyres.

Now, after several months of practising, the team could make the toys of the old tyres faster and more beautifully, he said.

The toys, donated by the youth union, had provided a livelier playground for the children, especially in local schools that had limited funds for buying toys, he said.

Each set of toys made of old tyres was estimated to be 5-7 million VND (215-301 USD) and the quality was the same as the toys for sale in the market, he said.

Vu Nguyen Dang, Secretary of the provincial Youth Union, said the youth union had donated 20 sets of toys made of old tyres to local kindergartens and residential areas since May.

It planned to give an additional of 31 sets of toys made of old tyres to local kindergartens and residential areas by the end of this year, he said.

It not only created a livelier playground for the children but also contributed to raising their awareness of protecting the environment, he said.
VNA