Negotiations between Vietnamese representatives and the French auction house Millon have ensured that Emperor Minh Mang's gold seal will be returned to Vietnam. 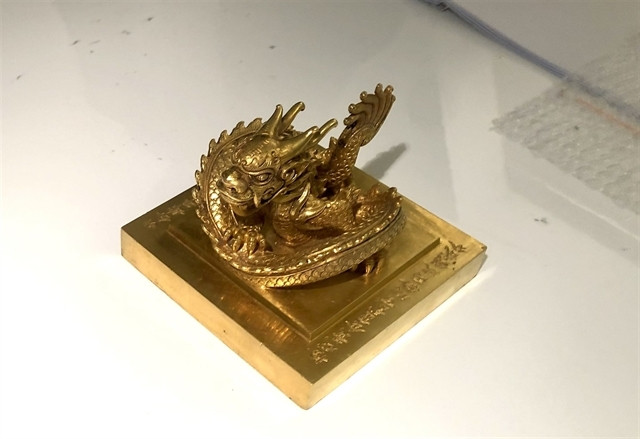 The department said the negotiation was a success thanks to the plan to repatriate antiquities, developed by MCST and submitted to the Prime Minister.

The Ministry, together with other relevant organisations and individuals, will continue to coordinate with Millon to implement procedures for repatriating the 10.78-kg gold seal to Vietnam as soon as possible, while ensuring the legal regulations of both countries.

On October 19, 2022, Millon Auction House announced the auction of more than 300 items and artworks hailing from or related to Vietnam in the catalogue Great Civilisations: Vietnam Arts Sale on October 31, including the Nguyen Dynasty's gold seal Hoang De Chi Bao (Treasure of the Emperor), cast in 1823 during the reign of Emperor Minh Mang (1820-1841).

The Vietnamese Embassy in France worked with the parties concerned regarding the auction. Representatives of the Nguyen Phuc clan in Vietnam, who are descendants of the Nguyen Emperors, had also sent a request for the auction of the seal and the bowl by Millon to be cancelled.

The auction of the seal has been deferred twice by the Paris-based auction house due to "the strong interest of the Vietnamese State", as they announced on their website.

Realising the meaning, importance and historical, political, cultural and artistic values of the Treasure of the Emperor, the MCST, under the direction of the Government, coordinated with other ministries, sectors, organisations, and individuals to mobilise every resource for returning the seal home as soon as possible.

MCST consulted relevant ministries to develop a plan and submitted it to the Prime Minister for permission for implementation. A working group began negotiations with the French auction house, seeking to purchase the seal without any auction.

The Vietnamese working group has researched and assessed the current status and authenticity of the gold seal Hoang De Chi Bao, which is currently kept at the office of Millon auction house, located on No. 19 rue de la Grange-Bateliere Paris, France.

Research and comparisons with other seals of the Nguyen Dynasty in Vietnamese museums confirmed the seal was cast in 1823 under Emperor Minh Mang.

According to the Department of Cultural Heritage, the repatriation of the Nguyen Dynasty gold seal will not only recover lost antiquities and cultural heritages, but also affirm the country's stature and influence, helping establish the Party and State's clear-sighted viewpoint on preserving and bringing into play the cultural heritage values, develop an advanced culture deeply imbued with the national identity of Vietnam, and contribute to the world's cultural heritage.

This is vital to safeguarding the integrity of cultural heritage, an important UNESCO issue that UNESCO, and also demonstrates Vietnam's role in implementing the international conventions to which it is a party, the department said.

The Treasure of the Emperor gold seal has many similarities with the two other Nguyen Dynasty gold seals, like Sac Menh Chi Bao and Hoang De Ton Than Chi Bao, which are currently preserved at the Vietnam National Museum of History.

All three gold seals are cast with 10-year-old gold and have square-shaped seals and dragons carved on top. The dragons' foreheads are engraved with the word Vuong (Emperor) which symbolises the emperor's supreme power, and each of their legs has five claws. They are similar in size and weight.

This is a form of seal that has never appeared in previous dynasties or countries in the region and the world.
VNS