Hai Duong-born Pham Thi Hong Thanh has been the most successful athlete from Vietnam at the 2022 Asian Weightlifting Championship in Manama, Bahrain. 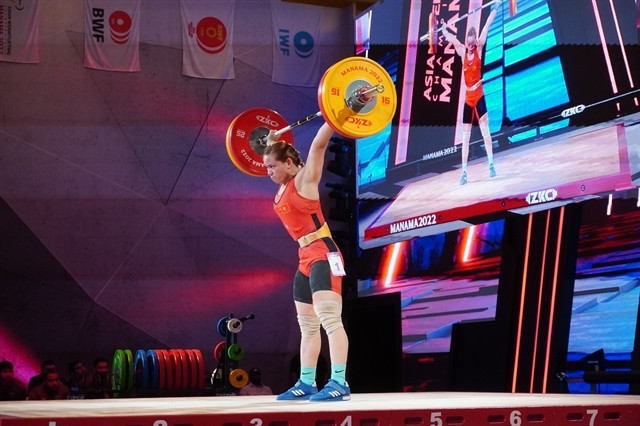 Thanh, who also set records at the Ha Noi Games in May, dominated the continental tournament in all events of snatch by lifting 100kg, clean and jerk of 117kg and her total of 217kg.

Thipwara Chontavin of Thailand came in second with silvers in snatch (91kg) and total (201kg) and a bronze in clean and jerk (110kg).

Indonesian Sarah Sarah placed third with a silver in clean and jerk (111kg) and two bronzes in snatch (89kg) and total (201kg).

Tam made a brilliant international debut as a national team athlete at the age of 19 in the women's 59kg class although she was not considered a contender as much as her teammate Hoang Thi Duyen who won golds and set a record at the May SEA Games.

She claimed her title in the snatch with a lift of 93kg. In the clean and jerk, the Thai ethnic minority woman came third with a 115kg result. In total, her 208kg brought her a silver. She was second overall.

Her total result was 8kg heavier than what she did two months ago at the Asian junior championship in Uzbekistan, where she won three golds.

Meanwhile, senior Duyen had a poor result because of her back injury, placing fourth in all events.

China's Long Xue pocketed two golds in the clean and jerk (118kg) and total (209kg) and a bronze in snatch (91kg). She topped the overall ranking.

Natasya Betayob of Indonesia was third with one silver in the clean and jerk (116kg) and a bronze for her total (205kg).

Ricko Saputra of Indonesia won three bronzes, 133kg in the snatch, 158kg in the clean and jerk and 291kg in total.

The Asian competition will close on Sunday.
VNS