Nearly 200 films from 68 countries and territories will feature at the sixth Ha Noi International Film Festival (HANIFF VI) next month, the Ministry of Culture, Sports and Tourism has revealed. 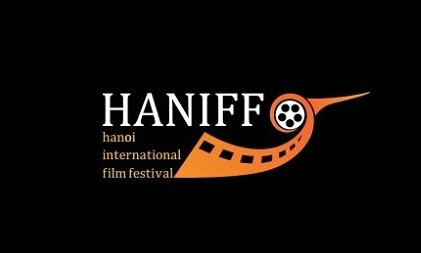 The logo of the Ha Noi International Film Festival. Nearly 200 films from 68 countries and territories will feature at the event next month
With the theme "Cinema - Humanity, Adaptation and Development", the festival will be held by the culture ministry's Cinema Department to honor excellent international and Vietnamese cinematographic works with high artistic value, rich in humanity and creativity in cinematic language.

It also encourages new Vietnamese and world talent in film acting and producing.

This is an opportunity to boost the domestic film industry and its integration into the world market while simultaneously promoting the image of Vietnam as a safe, friendly, peaceful, hospitable, integrated and developing country, the culture ministry said in a statement.

It added that UNESCO had recognised Ha Noi as a city for peace and creativity, and the event helps enhance the country's position and brand in artistic creation with a vision of sustainable socio-cultural development.

Two ceremonies will be held on November 8 and 12 to mark the opening and closing of the event. Awards will also be presented on the closing night ceremony at the Friendship Palace at 91 Tran Hung Dao Street, Ha Noi.

The two ceremonies will be broadcast live on Vietnam Television (VTV).

The festival organising committee has set up a council to select qualified films to be shown at the five-day festival, which starts on November 8.

More than 190 long and short films have been chosen from over 400 films submitted to participation from 68 countries and territories.

The council conducted final evaluation activities on the candidates in mid-September and is expected to select works from different categories for the contest, including 10-12 foreign films for the long film category and about 40 others for the short film category.

In the short film category, the council is expected to select 30 features, documentaries and animations from around the world and ten from Vietnam.

The category of world panorama will feature 70-80 films, including 56 long and 21 short productions, which will be shown during the festival. The contemporary feature category will have 43 films, 22 short and 21 feature films.

For the national cinematic category, nine South Korean films will be presented.

Activities such as film screening and the film project market will be held at Daewoo Hotel, as well as two seminars with themes about South Korean cinema spotlight and film production, distribution and dissemination to overcome the COVID-19 pandemic.

An exhibition highlighting Ha Noi historical monuments and cultural heritages will be held during the festival.

There will also be an outdoor movie screening area and a movie star exchange programme on November 9, 10 and 11 in the centre of Ha Noi.

Sightseeing tours through some attractive destinations around Ha Noi and Bac Ninh city will be offered to guests and participants on November 11.

It is reported that the organising board has worked with cinema chains such as the National Cinema Centre, BHD Cineplex, CJ CGV and Galaxy to coordinate preparing and promoting the filming programs two weeks before the opening ceremony.

Speaking at a meeting of the organising board held recently, Ly Phuong Dung, deputy director of the Cinema Department, said that along with difficulties related to copyright issues, it was really hard to invite foreign films to the festival due to impacts after the COVID-19 pandemic.

The organising board is looking forward to receiving support from mass media before, during and after the event to spread its reputation "wider and deeper", she said.
VNS