Farmers in some localities in Gia Loc district practice boat racing at leisure. Besides physical exercise, they have won a lot of tournaments. 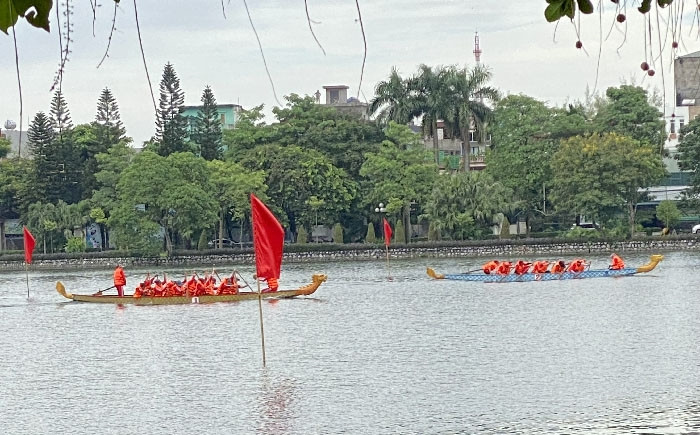 Rowing is a strong point of Gia Loc district in sports. In the photo: Gia Loc’s rowing team triumphs at the 9th provincial Games
Many tournaments conquered

57 years old, Vu Thi Be in Ha Bi hamlet is still a member of the boat racing team of Yet Kieu commune. Having conquered many tournaments, she is no longer in form like before but imparts her valuable experiences, techniques and competitive mentality, to later generations to achieve victories.

Be is not the oldest participant in competitions. 72-year-old Vu Thi Giai is a member of the boat racing team in Ha Bi hamlet. In the recent Boat Race of the 9th Hai Duong Games on Bach Dang lake, Giai still held a wooden bell to keep the harmony on her boat. Three teams of Gia Loc district triumphed in four out of six events of the tournament.

Especially, all rowers are farmers and workers who take advantage of their leisure time to practice. The Dinh Dao river’s section near Quat temple is often boisterous with the voices of rowers whenever rowing teams practice.

A leader of the district Center for Culture, Information, and Sports said boat racing is believed to originate in Gia Loc and has long been a strong point of the district in sports.

Rowing particularly develops in communes along the Dinh Dao river, including Yet Kieu. In ancient times, local people clung to the river and developed fishing, thus having conditions for practice.

Ha Bi hamlet in Yet Kieu commune is also the hometown of famous general Yet Kieu of the Tran dynasty – a general exceptionally good at naval warfare.

Through generations, people in Yet Kieu commune have always been good at water-related things, including boat racing.

Gia Loc's rowing teams always have the absolute advantage in tournaments, and the recent one of the provincial Games is an example.

Vu Hoang Si, Deputy Director of the district Center for Culture, Information, and Sports, said rowing is an indispensable ritual at the festival of Quat temple – the worshipping place of famous general Yet Kieu.

Rowing in Quat hamlet has a long history. Whenever the festival take places, local people, no matter where they work, take time to attend the festival and rowing ritual.

Before rowing, rowers gather at the rowing ground, two rows per team. When invited by the organizers, rowers attend an incense offering ceremony and carry out the rowing ritual.

When kowtowing to the saint, coxes in the middle, flagmen on the left, and bellmen on the right slowly advance to offer incense and stand horizontally to perform the prostration ritual three times. Meanwhile, each team stands vertically in two rows with the captain in front.

The cox goes on board first, followed by rowers in two parallel rows pair by pair to balance the boat, the bellman, and finally the flagman. After all rowers stably sit in their positions, boats are rowed forward one after another on the river as commanded to start the competition.

“Rowing in Gia Loc is said to date from the time of general Nguyen Che Nghia. It has become an indispensable sport and ritual of Quat temple festival and a strong point of the district in sports,” said Si.
TIEN HUY