What a difference a day makes - twenty-four little hours. 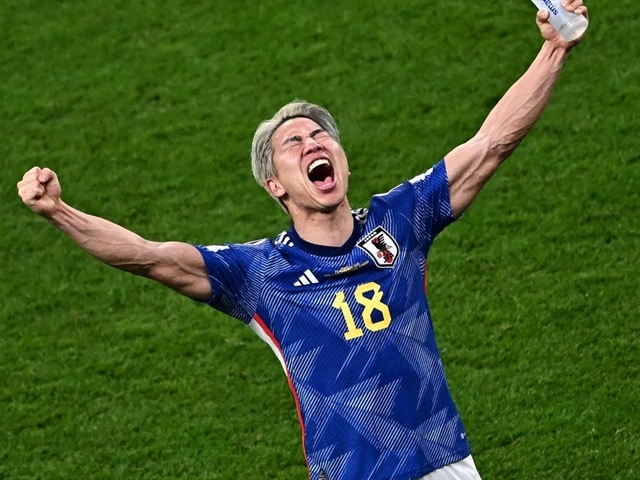 Takuma Asano, his name meaning 'Pioneer' in Japanese, rocked the whole world with his impossible goal. AFP/VNA Photo
On the opening day, Qatar became the first host country to lose an opening game. A dismal performance as the men in burgundy couldn't even advance the ball to the final third in the first half.

Adding salt to the wounds is the fact that Qatar is the holders of the Asian Cup, which practically means they are the best team of the region.

After The Maroon's loss, pundits were doubtful on Asian football's hopes in this World Cup. Unfavourable group draws, historical results, and a lack of international football were the reasons cited.

That is, until just 48 hours later.

Argentina, 5/1 by bookmakers as favourites, faced off against a Saudi Arabian side that was hammered 0-5 by Russia in 2018.

Pundits reckoned that La Albiceleste would win by three, four goals. And indeed did Messi and company slotted four in Mohammed Al-Owais' net in the first half. However, only one goal was allowed - Messi's penalty kick.

Casual supporters might thought that Saudi Arabia was lucky, but it was not just luck that was in Hervé Renard's favour.

Renard, who coached Nam Dinh for over half a season in the V-League, came up with a clever offside trap that caught the Argentinians time after time again.

In the second half, Renard's attackers surprised everyone, converting their only two chances in the whole game, and completed their miracle comeback.

"It was like a Genie that came down and granted the Saudis their wish," said VTV's commentator.

Three hours after Messi and company fell down, Australia meets World Champions France in another David vs Goliath story.

Graham Arnold's men did wound the beast by taking the lead, but was battered 4-1. However, sending Les Bleus shivering, although for a few minutes, is a positive note that the Socceroos could take for encouragement.

Then another world champion faces off against an Asian team in group E. This time the Titans were Germany, while Japan plays the role of the heroic Eren Yeager.

The match started just like the plot of an anime. The giant dealt the first blow to the hero, with a penalty from Gundogan.

The Titan then cornered the hero, and just as when all hope was lost, the power of friendship emerges. Takumi Minamino and Ritsu Doan combined with great teamwork to make the beast bleed.

Stunned, the Titan raged on but Takuma Asano, in his cape and shining armor, cleverly dealt the killing blow to the beast.

I was around a group of Japanese friends when the match happened, and I was happy for them, as if Vietnam were in the World Cup themselves.

For me, every victory and every achievement made by an Asian team give hope to countries such as Vietnam, that one day we can have our World Cup moment. And with the expansion on the horizon, there is a chance for everyone.

And hopefully, Son Heung-min and South Korea can keep on bringing the sun and the flowers to an entire continent.
VNS