Connection for tourism development between Hai Duong and Khabarovsk Krai

The secretary of the provincial Party Committee suggested that the two localities build a close and long-term twinning relationship.

Secretary of the provincial Party Committee Pham Xuan Thang affirmed that Vietnam in general and Hai Duong in particular have special feelings for Russia.

This is the foundation for the province to continue the construction and development of relations in various fields with Russia and Khabarovsk Krai in the new situation with an immediate goal of connection for tourism development.

Secretary of the provincial Party Committee Pham Xuan Thang stressed that in the context of international integration, localities cannot stand apart from linkages but must develop together.

Therefore, Hai Duong would like to cooperate with Khabarovsk Krai to lay the foundation for tourism development between the two localities. 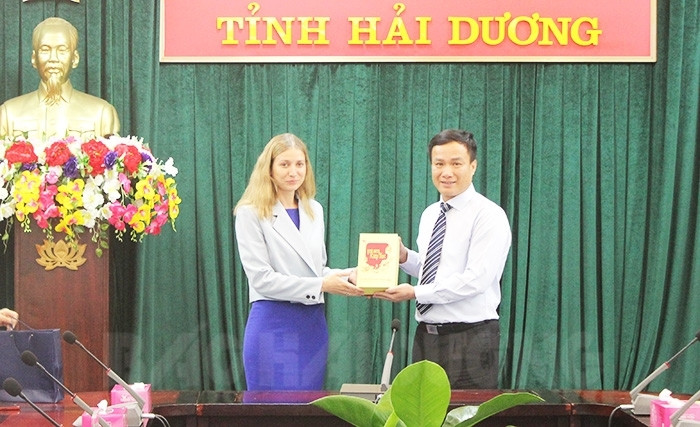 Chairman of the provincial People's Committee Trieu The Hung presents a souvenir, a tourism product and agricultural specialty of the province, to Ms. Puntus Ekaterina Andeevna, Minister of Tourism of Russia's Khabarovsk Krai
Being a province with profound culture imbrued with characteristics of the Red River Delta and a long-standing history as advantages, Hai Duong will set up tourism bridges to exploit this potential in the coming time.

On the other hand, people in the province have high living standards, leading to great demands for tourism.

This is also a condition for the two sides to exchange and connect tourism groups to support each other's development.

The secretary of the provincial Party Committee suggested that the two localities build a close and long-term twinning relationship.

With diverse topography and natural landscapes, the province is effectively exploiting its advantages and strengths to heighten the economic value of tourism.

The two sides discuss cooperation at the People's Committee of Hai Duong province
The provincial authorities intend to develop tourism as a key economic sector, thus focusing on investing in tourist attractions, with attention paid to smart tourism and development of diverse and high quality tourism products.

Hai Duong authorities also give priority to exploiting its strengths in spiritual and competition-examination tourism and building specific tourism images.

Ms. Puntus Ekaterina Andeevna was impressed by Hai Duong's tourism development potential and advantages and confirmed that the two localities could establish relationships in many aspects.

Besides tourism, Hai Duong and Khabarovsk Krai have many similarities in agricultural development. This is the basis for the two sides to tighten association and support each other for mutual development.

On this occasion, Ms. Puntus Ekaterina Andeevna respectfully invited leaders of the province to Khabarovsk Krai to attend a tourism forum scheduled for September 22 – 24 for surveying and learning towards the formation of a cooperative relationship between the two sides.