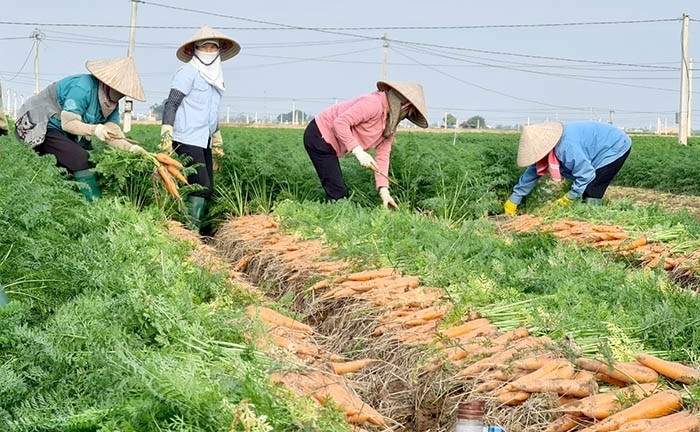 Thanks to growing in fertile alluvial soil and farmers’ extensive experience in the cultivation process, Duc Chinh carrots are naturally sweet and fragrant

For a long time, cai hoa vang sticky rice has been known by people in and outside the province as a specialty of Kinh Mon.

The locality is blessed by nature with alluvium from surrounding rivers, weather, and soil of a half-mountain half-plain area, forming round and delicious cai hoa vang sticky rice grains.

Kinh Mon has about 820 ha of cai hoa vang sticky rice with an average output of over 2,000 tons/year.

Kinh Mon is also the “capital” of onions in the North. With about 3,600 ha of onions/crop/year, the town authorities are encouraging farmers to change their farming habits and switch to clean and organic cultivation.

Duc Chinh carrots in Cam Giang district have been popular among domestic and foreign consumers. Thanks to growing in fertile alluvial soil and farmers’ extensive experience in the cultivation process, Duc Chinh carrots are naturally sweet and fragrant.

Last winter crop, the commune had more than 83 ha of carrots planted under VietGAP standard, and carrots in the remaining area were safely grown.

Over the past years, Hai Duong authorities have proactively carried out connection and trade promotion activities to sell special and key farm produce.

Right at the beginning of a season, the province's agricultural products are put on sale in large supermarket systems like Metro, Hapro, and BigC. At the same time, they are available in new potential markets such as Central and Central Highlands provinces.

Regarding export, besides the traditional market (China), thieu lychees of Hai Duong have been present in some new markets like the US, Australia, the EU, Singapore, Malaysia, and Canada.

To improve the value of special and key farm produce, the province has focused on developing key and specialized farming areas in localities, such as thieu lychee regions in Thanh Ha and Chi Linh, guava areas in Thanh Ha and Ninh Giang, and kohlrabi, cabbage, and cauliflower zones in Tu Ky, Gia Loc, and Kim Thanh.

Along with that, the granting of growing area codes and traceability of agricultural products have been promoted, the competitiveness of farm produce and export service have been improved.

With existing advantages, changes in the process of cultivation, propaganda, and introduction of products have contributed to heightening quality and value, affirming the brand names of special and key farm produce of Hai Duong in domestic and foreign markets. The economic value of onions in Kinh Mon has reached over 300 million VND/ha/crop; carrots in Duc Chinh, more than 300 million VND/ha/year.